This is a pretty and super easy Indonesian dessert, rich with the flavours of coconut milk and palm sugar, but still light and refreshing. Again, as with so many Asian desserts, texture comes into play, this time with the use of agar agar, which is a setting agent made from seaweed. It is widely available here compared to animal gelatine. It splits the moment your teeth sinks into it, it is almost crunchy if you make it right. The other unusual characteristic of agar agar is that unlike gelatine which requires refrigeration to set properly, agar agar sets at room temperature which explains why it is very commonly used in the tropical climate of Southeast Asian countries. Another interesting feature of this dessert happens when it cools, the coconut cream floats to the top leaving the bottom half layer a beautifully translucent amber. If you like lighter colour, you can use less palm sugar and substitute with plain sugar instead.

This agar is one of those Mother does best. Unfortunately, it doesn’t keep very long because the coconut milk is not quite boiled, just quickly heated. So it has to be served and finished in short period of time, one day or two.

Swallow Globe Brand is the agar that is widely used, remember to get the plain one. We use two packs for the big pudding mould. It can hold up to 1800cc of liquid mixture.

Melt chunks of gula melaka and sugar in part of the water called for in the recipe.

Season the coconut milk with a bit of salt.

Add the remaining water and agar in a pot. Strain sugar liquid into the pot. Cook over medium heat.

Agar will have to be fully cooked, so constant stirring is required. Let it boil for a couple of minutes.

Quickly stir the coconut milk into boiling agar mixture. Do not turn the heat off.

Keep stirring for one minute.

Quickly pour the agar mixture into the prepared mould. Please be careful.

The mould should not be moved until the whole pudding set. That way, the coconut milk part will float nicely undisturbed and formed into that nice milky layer.  This is a very old mould, she resists buying new one, claiming that new pudding moulds are not as nice as her old one. This one looks quite loved, hence the crooked sides here and there, I actually had to balance it using a fork. 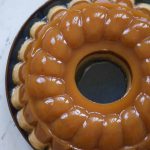 This is a pretty and super easy Indonesian dessert.
Cook Time15 mins
Servings: 6

Free email series Tips & recipes for family-friendly dinners in no time at all!

Free email series Tips & recipes for family-friendly dinners in no time at all!